Volunteers stay in Mtitu, living with host families, and undertake various projects as required at the time. If you are interested in volunteering and making a contribution to the Mtitu community, please contact us.

Here are some accounts of what some of our previous volunteers have achieved. 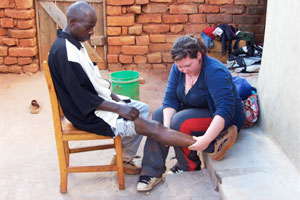 On arrival at Mtitu we were shown the new Maternity Clinic which had been completed but was not yet fully equipped and operational.  Although staffed by a nurse a lack of supplies meant that she could not open the clinic to the public. Valerie asked if she could use the clinic as a base for her massage and was soon working with more than 20 people each day.  Additionally, the nurse was very interested in the use of massage and picked up the basic massage techniques very quickly.  She was able to help with many of the people who arrived for treatment as well as being a very good interpreter.
Patients arrived from all over the village, as well as from neighbouring villages and by the end of the time in Mtitu over 100 patients had been seen.  An additional bonus was having the nurse able to continue the work. 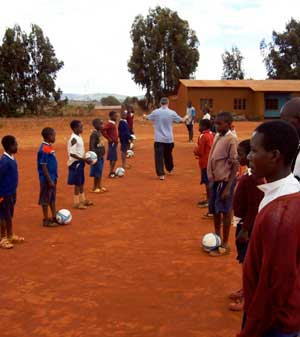 The initial plan was to work with young people to help develop their football skills.  However, a number of adults turned up for the first training session and it was clear that if they could be trained in the basics of coaching then they would be able carry on developing the young players in the future.
The enthusiasm of the young players and the adults to learn played a major role in making the training sessions so enjoyable.  The adults were able to pick up the basic techniques very quickly and by the end of our time in Mtitu they were leading the young players through the sessions.  The quality of the young players was amazing, bearing in mind that there was no electricity or television in the village, and that more than 95% of them had never seen a football match before.  We left with plenty of optimism that football would continue to develop until our return. 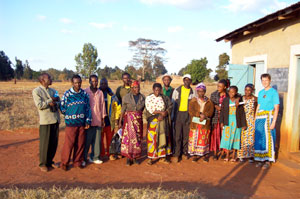 One of the big problems in a village like Mtitu is employment and business development, in an area where the traditional occupation has only been agriculture. Last time I visited Mtitu we set up a small business loan scheme where people could take out an interest-free loan to start their own business. I was delighted to find that 14 people have now taken out loans and their businesses have all been successful enough to pay back the loans in full. The next round of loans is now about to start. My workshops were aimed at getting people to write a simple business plan, which we achieved by the end of the week. I was also trying to help people to think of new and innovative businesses and there were a couple of good ideas including a bicycle hire business and a mobile snack vendor travelling round the village selling to workers. Perhaps the greatest success of the week was agreeing a solid financial basis for the crafts that people in Mtitu make to send to me back in the UK to sell. We agreed a pricing structure which pays everyone who makes the crafts a good standard wage; I then sell the crafts here at a small profit and the profits go back to Mtitu for community projects. 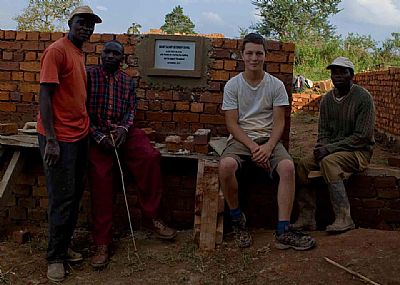 Alex spent two months in Mtitu in early 2013 helping to start building work on the second classroom block for the school. As a thank-you for his help, the villages have named the block after him!